Nanbu hishizashi is another textile tradition of the old Nanbu region. Born out of necessity. It was passed down through generations in the southern coastal areas of Aomori prefecture. Developed in farming communities to reinforce clothing with extra strength and warmth, it sprang from the motainai ethic and aesthetic sensibilities of rural folk.

In the Edo period farmers were permitted to wear only clothing made of hemp, and precious cotton thread could be used only for reinforcement. Woman developed Nanbu hishizashi, one form of counted-stitch emboroidery, using exclusively diamond motifs in hundreds of patterns. 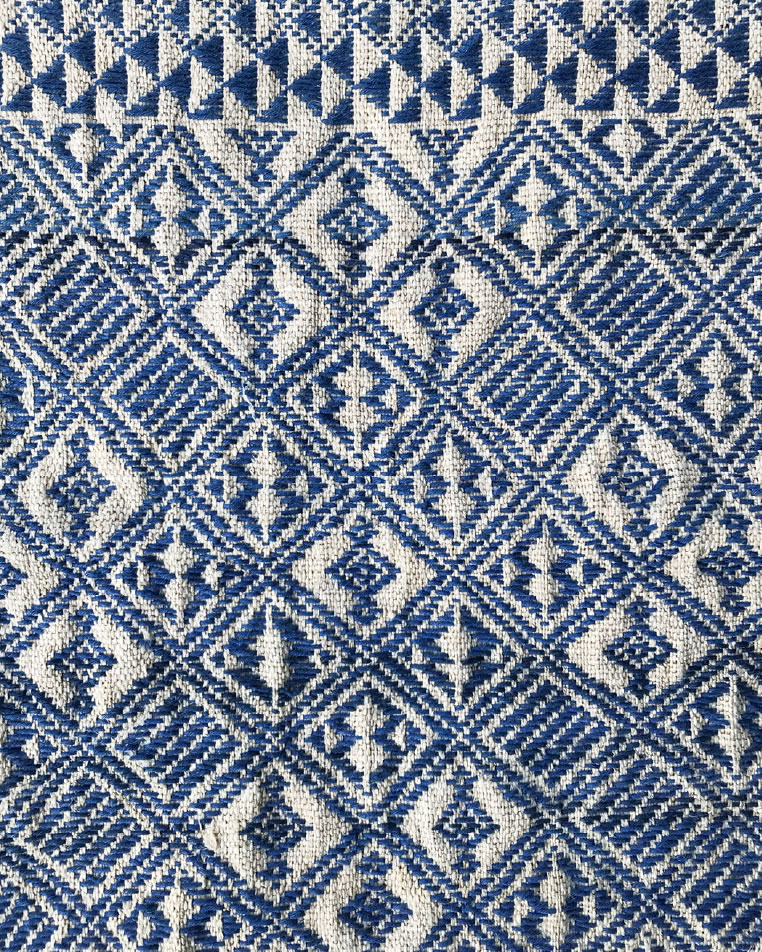 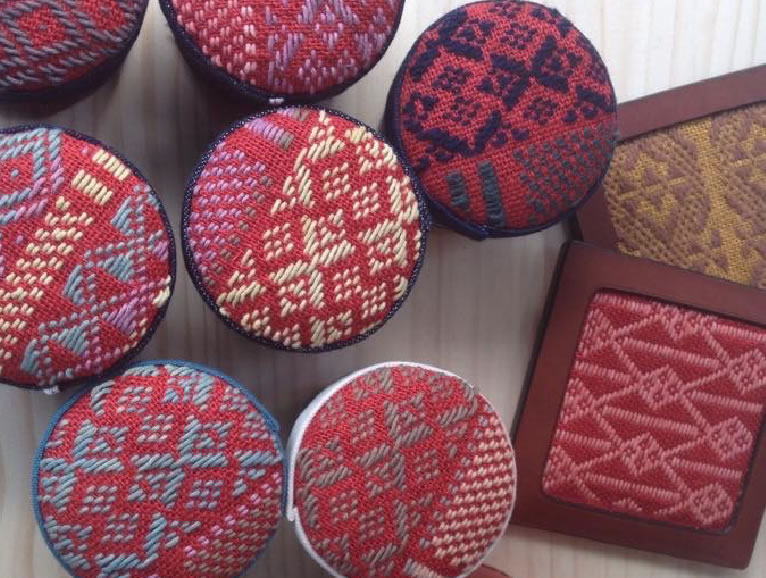 Hishizashi is often confused with koginzashi, a traditional technique from the Tsugaru region of Aomori Prefecture.
The following is a summary of the similarities and differences between the two techniques, which are both made by counting the number of stitches along the weft of plain weave cloth.

Hishizashi is often confused with koginzashi in the Tsugaru region of Aomori Prefecture.
Many locals confuse the two, thinking that the two are called “Hishizashi” (southern part) and “Koginzashi” (Tsugaru part) simply because of the area in which the designer lives, the southern part or Tsugaru part of Aomori Prefecture.
Both Hishizashi and Koginzashi are the same technique of stitching along the weft of a plain weave cloth without copying the design onto the cloth, counting the stitches.
It is believed that both techniques were originally started to keep the cloth warm and to reinforce it, but they have come to have a compositional beauty as an expression of each stitcher’s aesthetic sensibility. 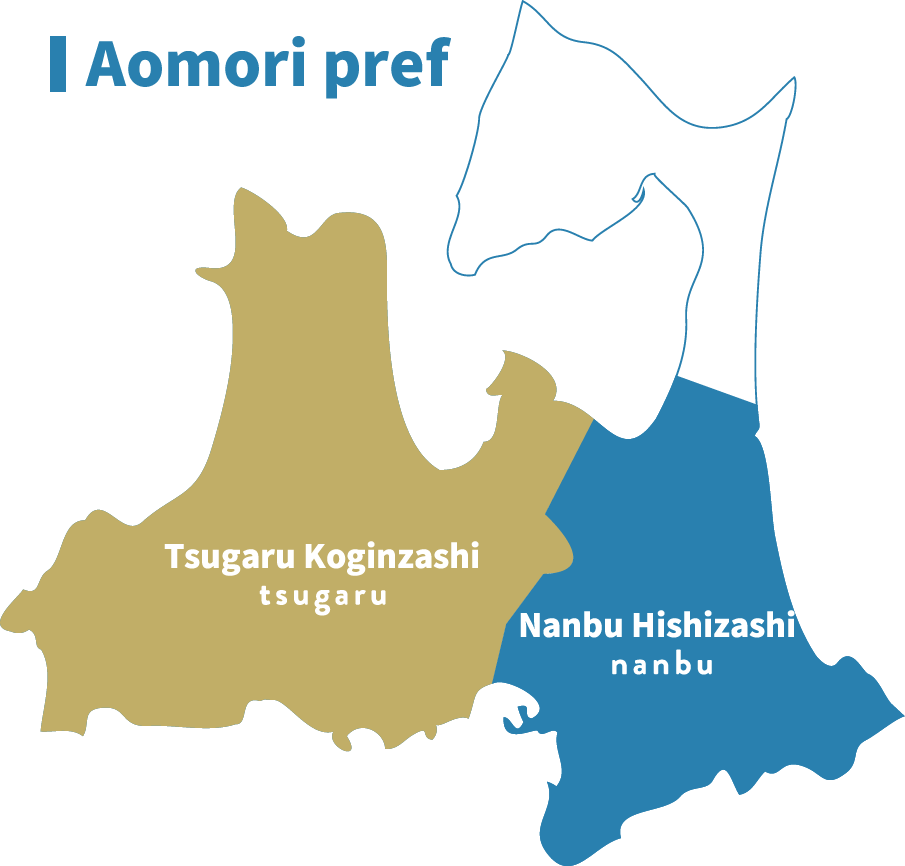 Most of the patterns are geometric patterns inspired by nature.
The major difference between Hishizashi and Koginzashi is the counting of the number of stitches.
In Hishizashi even numbers of eyes are counted regularly against the vertical weave of plain weave linen to create a horizontal diamond pattern.
On the other hand, Koginzaashi, which is also from Tsugaru area in Aomori Prefecture, is made by counting the odd number of stitches.
The same pattern looks different depending on the number of stitches, but it is believed that the beautiful patterns were created in the distant past to survive the cold. 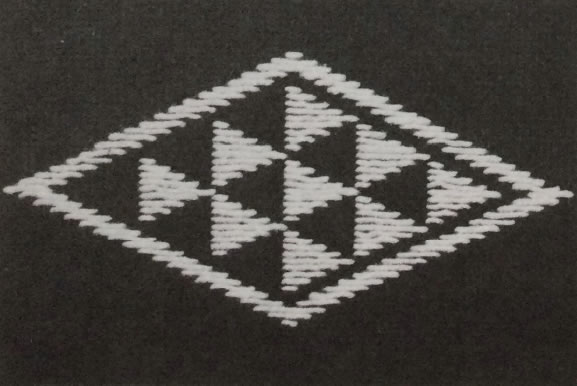 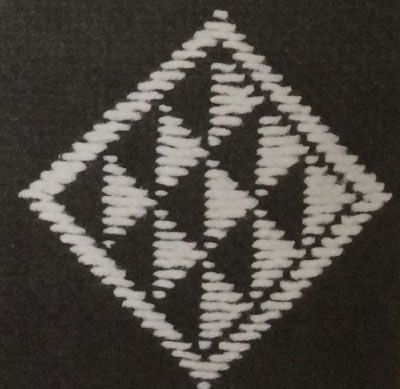 It is estimated that Hishizashi originated 250 years ago. Before the Meiji era (1868-1912), there was a big difference between the Tsugaru Domain in the west and the Nanbu Domain in the east of Aomori Prefecture.
While Tsugaru was fertile, Nanbu was the area where crops did not grow well, making it difficult to obtain yarn for sashiko (a form of stitching). In the Meiji era (1868-1912), when the railroads were opened, cotton textiles were distributed from the Kanto area, but the farmers’ lives did not improve much.
The fact that each motif of Nanbu hishizashi has a different color and material is not surprising. It shows sprits that people tried to use precious thread to the full carefully.
Hishizashi was mainly used on aprons, katasode (sleeve) of kimonos, long underpants, and handcuffs.
It is said that maekake (apron) was actually used until the early Showa period.

The pattern consists of even stitches of 2.4.6. 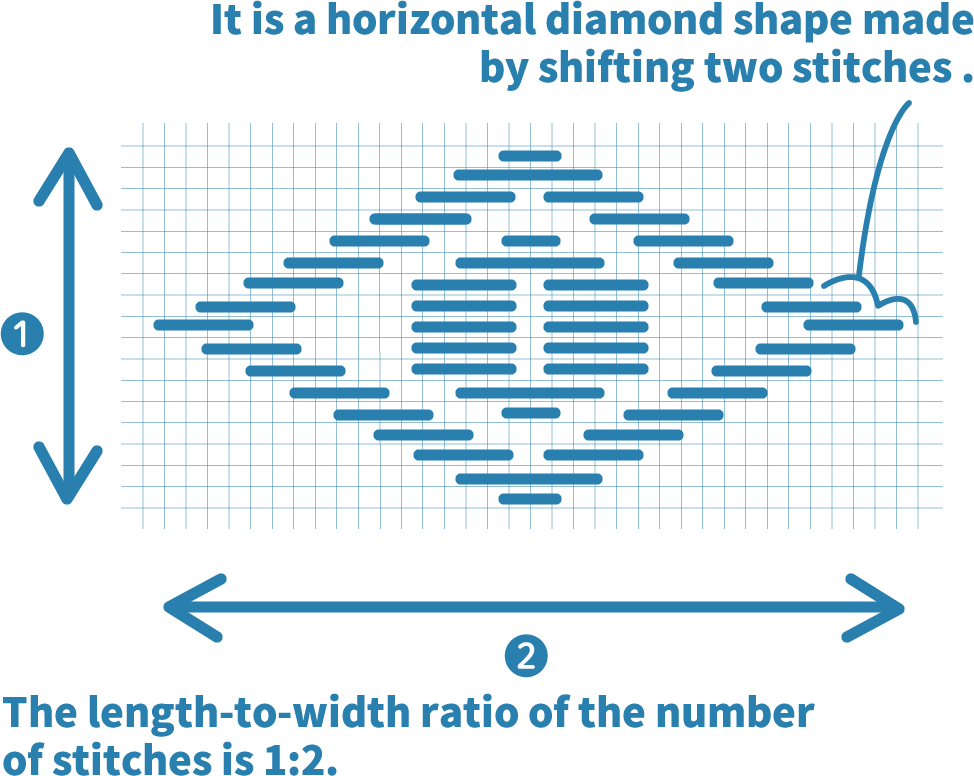 In the Edo period (1603-1868), the Tsugaru Domain was not allowed to wear cotton or silk due to the strict thrift laws.
It is said that koginzashi started when people began to use hemp thread to stitch working cloth, which was not an appropriate material for clothing in the cold north, to make it more durable and warm.
In the Meiji era (1868-1912), the thrift law was lifted and cotton became available to farmers. Koginzashi, which is stitched with cotton thread, developed rapidly because it is much warmer and more durable than hemp, and because it is slippery and easy to quilt with.
However, this was short-lived, and with the opening of the railroad, cotton fabrics that did not need to be used for sashiko became readily available, and kogin sashiko declined rapidly after its peak around 1895. By the end of the Meiji era, it is said that almost no stitching was done.

The pattern consists of odd number of stitches (1.3.5). 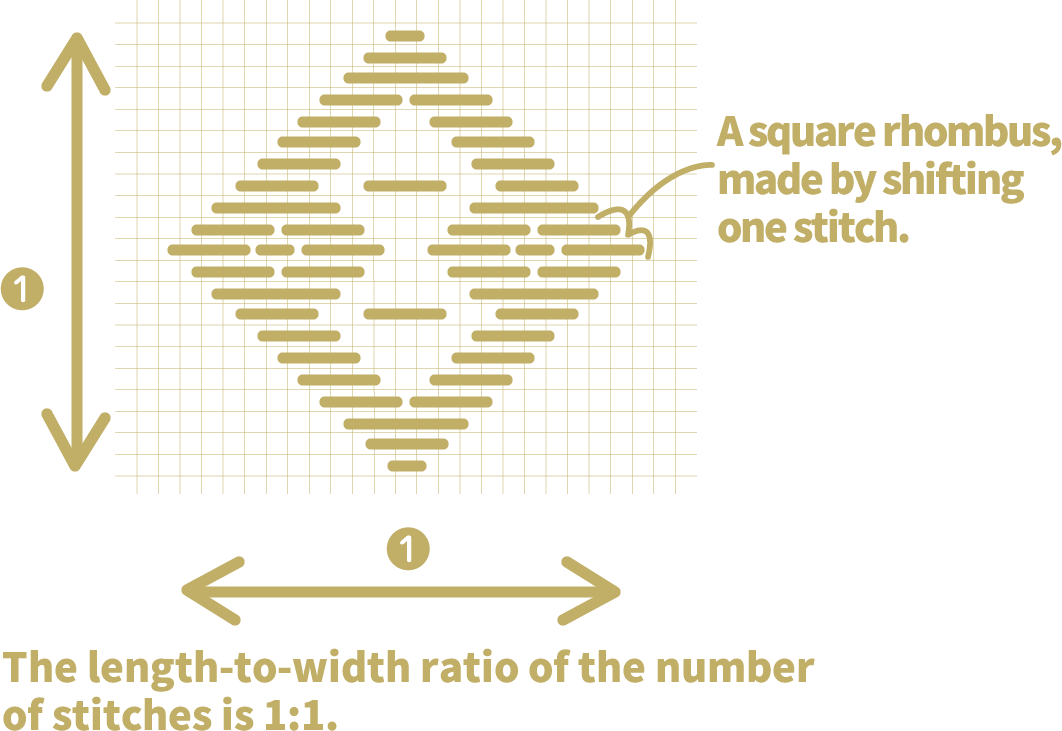 Traditional unit patterns are called “katakko”.
Many of the unit patterns used in kosaku (cloth and clothing stitched by rural women in the past) have been handed down to the present with the names of creatures and tools that must have been closely connected with life in those days.
It is said that there are more than 400 types of traditional unit patterns. The following are some of the representative patterns: “Plum Blossom “, “Abacus Bead”, “Scale pattern”, and “Cat’s eyes”. 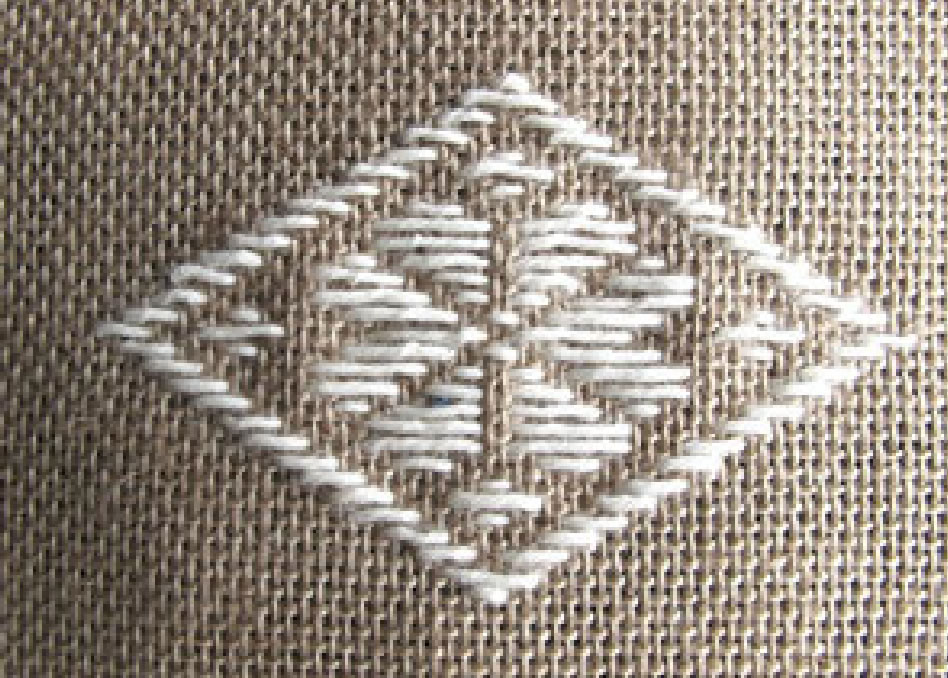 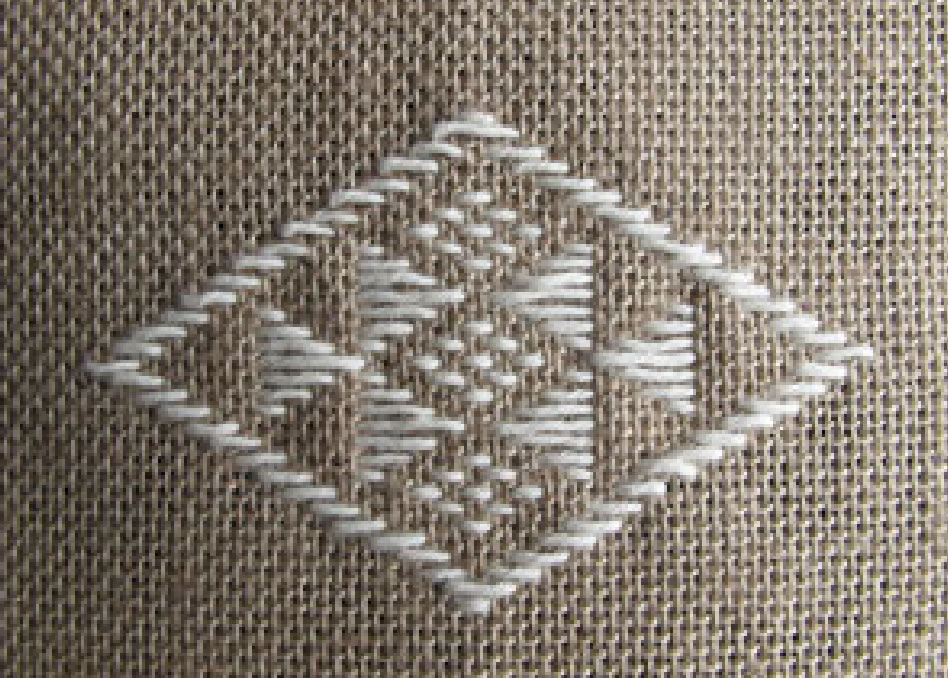 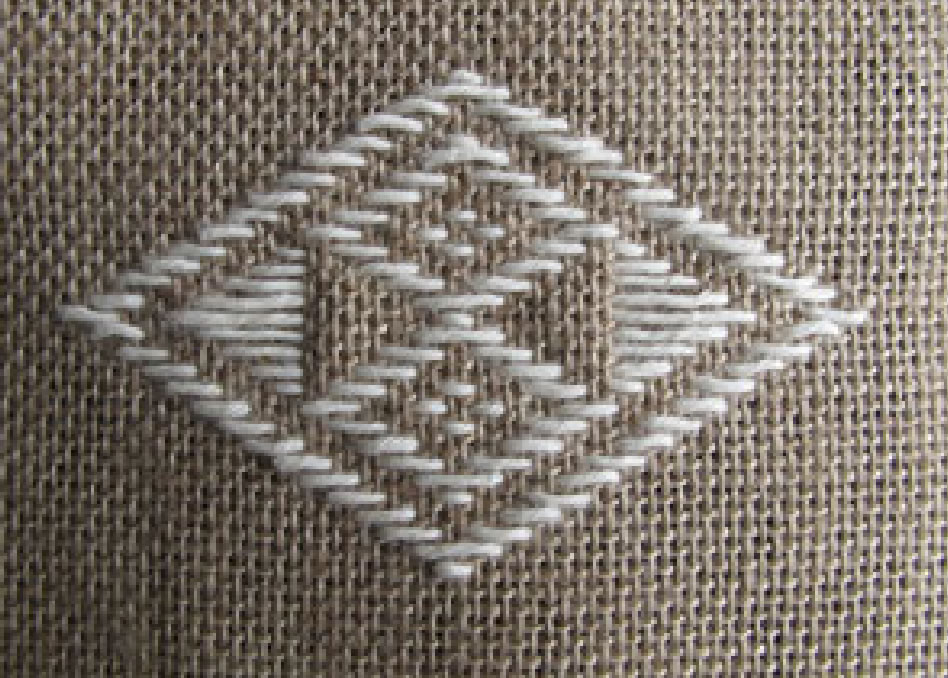 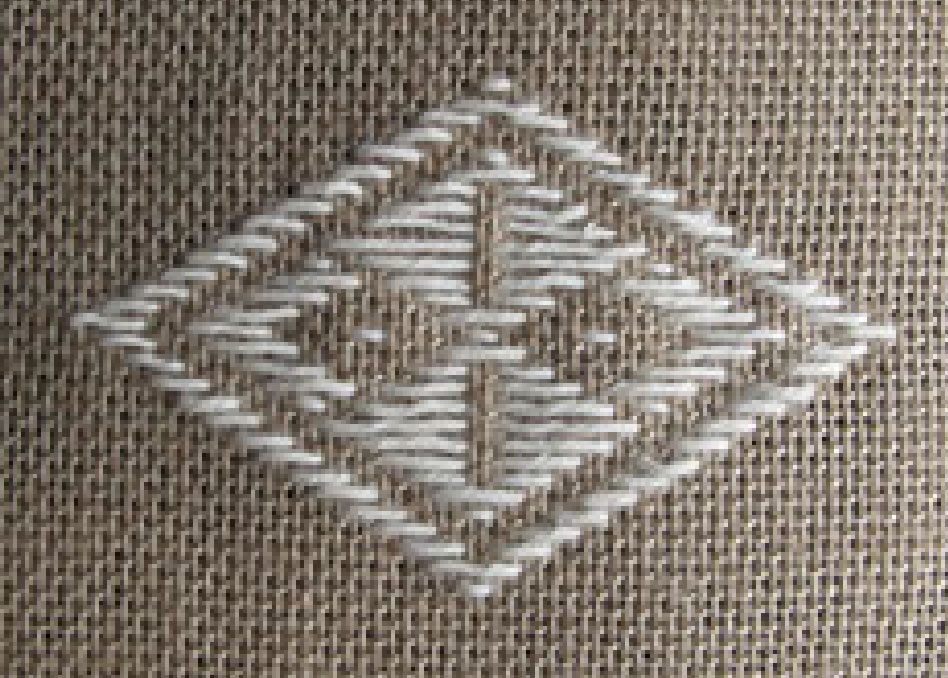